In the last 50 years, there has been significant growth in the amount and scope of fitness programs in the US. Rather than simply lifting some weights or hopping on a treadmill, we have a plethora of options when deciding how to burn some calories. Things like spin classes, yoga, Pilates, and martial arts-based fitness have become extremely popular. Another trend in fitness is to use skills or apparatus typically seen in the circus or other performing arts in fitness programs. Because of this trend, things like aerial acrobatics, also called aerial arts, are now accessible to the average person.

Another part of the trend to leave the standard home treadmill behind is the popularity of less-organized exercise programs. The rise of freerunning and parkour has inspired lots of people to go outside and use their environment to get fit. Competitions like Ninja Warrior are based on the idea of using natural terrain and obstacles to build strength, endurance, and flexibility.

There is a seemingly endless list of fitness programs available right now, all based on different disciplines or creative mediums. Your local gym or community center may offer ballet-based classes, martial arts-based programs, and even pole dancing as fitness. There are schools for children that teach freerunning and parkour, and there are aerial acrobatics classes that train children and adults in the circus arts of silks, trapeze, lyra, and rope. For this article, we’ll focus on 2 of these new programs to hit gyms across the US—aerial acrobatics and parkour.

What Is Aerial Acrobatics?

The term “aerial” in the circus refers to the use of any apparatus that hangs from the ceiling. The disciple of aerial arts includes trapeze (flying and stationary), silks, rope, lyra, cube, straps, and other apparatus designed for special performances. Each apparatus has a set of moves or skills that have been designed just for that apparatus. Acrobatics is just a word for tumbling and flipping. Therefore aerial acrobatics is flipping and tumbling in the air.

The trapeze and the rope have been around for almost 200 years. Using other apparatus like the lyra are also part of circus tradition. The silks are a new apparatus that came to popularity along with Cirque du Soleil in the 1990s. The skills for them are the result of years of trial and error by circus performers who spend hours working out new ways to use their apparatus. Audiences love to see performers “fly,” so the performers are constantly coming up with newer and better skills. Because aerial arts originated as a performance art, all of the moves are intended to be strung together in sequence to create a routine. However, when broken down, they can be used for fitness as well. Here is a breakdown of the main apparatus and how they are used.

The silks, or tissue, is a long span of fabric that is doubled over and hung from an anchor point. This results in 2 lengths of fabric that can be climbed, twisted around the body, or used to spin or swing. 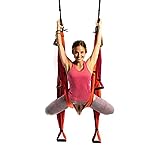 A trapeze is a bar fixed between two ropes and hung from the ceiling. It can be used stationary or it can swing. The swinging or “flying” trapeze is used by 2 or more aerialists. They swing in broad arcs high above the ground and make “passes,” which means transferring from one trapeze to another in the air. Passes can include flips and twists. The stationary trapeze can be used to hang multiple aerialists, to perform complicated poses, or to swing and flip. 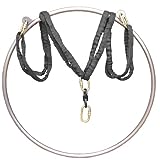 The lyra is a metal hoop that can spin. One or more aerialists can use it to pose, climb, and swing. It can be raised or lowered on its anchor point. 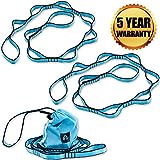 The rope is mostly self-explanatory. It’s made of material designed not to rub the skin on the aerialist’s hands too badly. They also usually feature a looped hand-hold and can spin. Aerialists can climb, spin, or pose in it. 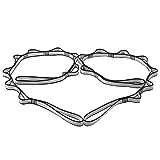 Basically, any shape that can be fabricated out of metal and hung from the ceiling can be used as a performance apparatus. Special apparatus have been made to look like chairs, stars, cubes, and many other shapes.

How Can I Train as an Aerialist?

Performers begin their training as an aerialist in the same way an athlete trains—by building strength and agility. If you are planning to be a performer, you need to start by building up a lot of strength while maintaining a lean body that is very flexible. You may want to employ a personal trainer to help you develop an exercise regimen that works for you. Once you are fit enough, you can enroll in an aerial arts class. Your class may focus on one apparatus or several and will start with the basics for that apparatus and work toward more advanced skills.

As with most sports or fitness programs, you can choose to pursue aerial acrobatics as a career or it can just be part of your fitness regimen. Many communities have dance school or sports centers that offer aerial classes just for exercise. You can take a silks class that teaches strength and flexibility. Some have started offering lyra and even trapeze. There are circus schools that allow the general population to take a flying trapeze class for fun. The use of these apparatus can help you build strength and endurance. They are a great addition to any fitness program. If you love it enough, you may decide to pursue the aerial arts as a career. If you do, there are several circus schools across the country where you can train to be a professional aerialist. It takes years and a lot of discipline to be a successful aerial acrobat, but it can be an exciting career. 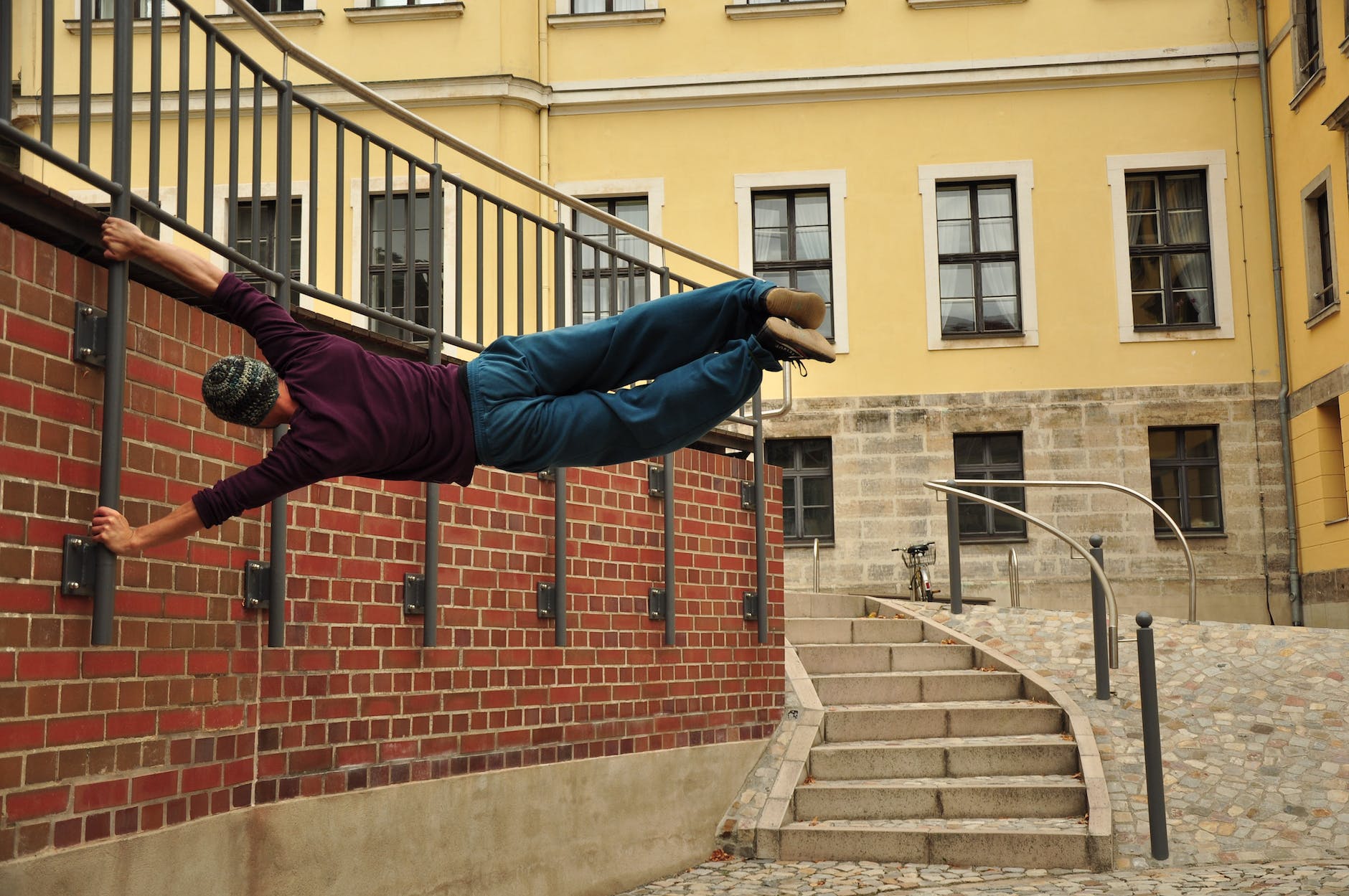 Parkour is the practice of moving through the environment and seeing the objects in that environment as obstacles. The goal is to find a creative way to move through the space. Parkour was born in France by a father and son who trained on obstacle courses in the military. They brought that concept, including the idea of focus and discipline while moving, to the art of Parkour. Some people think parkour and freerunning are the same things, but they have very different philosophies. Parkour is based on focus, discipline, and mastering your environment, while freerunning is more about performance and fun. Parkour now has thousands of participants, now called traceurs, around the world.

Like aerial acrobatics, parkour has a list of skills, or moves, that were developed over time by those who created the discipline. Most of the moves in parkour are named after how they are performed and what they look like. There is no apparatus for parkour because it relies on the environment. To practice parkour, you usually join a group and find locations with a lot of interesting obstacles. Parkour groups tend to know about locations in their community that have great obstacles to work around.

The creator of Parkour, David Belle, has been insistent that parkour not turn into a competitive sport. He believes this goes against the philosophy of parkour, which is to challenge yourself to be the best you be, to focus on the environment and find creative ways through it, and to grow in mental and physical strength. He believes everyone in any parkour group is equal and no one should be seen as better. Everyone advances together. This philosophy doesn’t work in a competitive environment. However, in spite of his objections, England recognized parkour as an official sport in 2017.

What Are Some Parkour Moves?

Here are some basic moves for those starting parkour:

This may sound simple, but in parkour everything is about seeing things in a new way. When you jump, consider the movement. Use both feet and then one at a time. Consider how the jump moves you.

Start simple. Jump over small obstacles at first and then move to larger ones. Focus on the different ways your body can jump.

Vaulting is the process of running toward something, placing your hands on the object and using your hands to propel yourself up and over the object. Once you’ve got the basic vault, you can add flips and twists.

Image by kerttu from Pixabay

Photo by Histuan Horvath from Pexels​

The difference between aerial acrobatics and parkour is very obvious once you do a little research on each of them. Parkour is a mental philosophy and much as it is a physical activity. It’s also performed mostly on the ground. Although it does involve vaulting into flips and occasionally swinging from things, you don’t stay off the ground for very long. Parkour has no dedicated apparatus. You can do parkour in any environment on whatever is in that area. Aerial acrobatics involves apparatus and skills that keep you off the ground for the entire time. Sometimes aerial acrobatics routines include floor work, but most of their skills are done in the air. You also must have a specific apparatus to do aerial acrobatics. In performance, even if aerialists are performing on what looks like everyday objects such as ladders or scaffolding, they are actually specially designed apparatus.

The one thing parkour and aerial acrobatics have in common is that, in their inception, they required their founders to look at an obstacle or apparatus and figure out an interesting way to use it and move around and in it. The first aerialists had to look at a rope or a length of fabric and figure out how to climb it in a way no one had ever climbed it before. They had to figure out how to hang from or pass someone up a metal hoop in a nontraditional way. In this way, when aerialists invent new ways to use their apparatus, they are taking a page from parkour.

For the most part, aerial acrobatics and parkour are very different disciplines. Parkour is very mental, in its truest form, and is non-competitive. Aerial acrobatics is very much for show. Parkour is done on the ground, where aerial acrobatics takes place high above the ground. On the surface, they seem very different. However, like any creative activity, they share roots. They are both rooted in the fact that humans love to push themselves, to see if our bodies can do what seems impossible. They are both about creative movement. This is the one similarity between 2 otherwise very different disciplines.